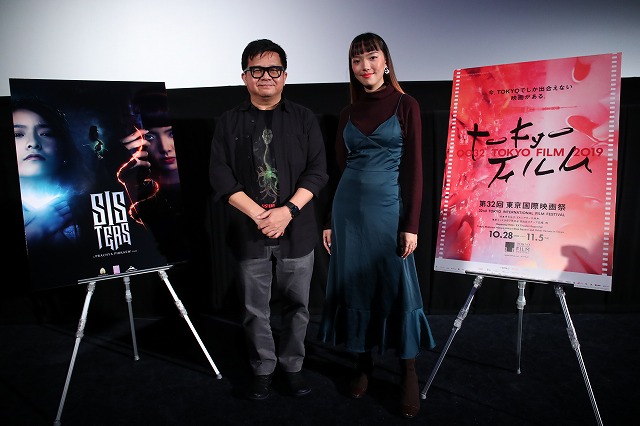 Can our destiny be changed, or at least altered to make it less painful for ourselves and loved ones? That is the central question of Prachya Pinkaew’s Thai horror film Sisters, which had its international premiere at TIFF 32 on November 3 as part of Crosscut Asia #06: Fantastic Southeast Asia.

It opens with a fast-moving pre-credit sequence tracing the centuries-old backstory of the Krasue underworld, as a young woman describes the “transformation” of her aunt, the sacrifice of her mother and the ongoing hunt for the baby her aunt left behind. That baby is now 15-year-old Mora (Nannapat Lertnamchusakul), beloved “sister” of Veena (Ployyukhon Rojanakatanyoo), who has devoted her life to becoming a full-fledged Demon Hunter in order to save her from an ugly fate.

The two girls must live apart for unexplained reasons of safety; Veena with the wheelchair-bound Uncle Singha, who is actually Mora’s father; and Mora with a stranger. Veena helps her uncle as he experiments with herbal mixtures meant to forestall Mora’s transformation into a demon, learns how to draw symbols that prevent the monsters from reaching them, and trains to fight with arrows and jagged knives.

When we finally meet the family’s most dread enemy, a slinky, polished woman who runs an “acne-removal” clinic that is really something else altogether, we realize that it may be high school, and Mora’s cute male classmate Kong, that are even bigger threats to her survival. By the time the human host-inhabiting demons, with beautiful female faces and the slimy bodies of — they are better left undescribed — literally come unhinged, the underworld war explodes in gore and Veena’s skills begin to come in handy.

The producer-director, sporting a t-shirt with the slimy demon emblazoned on it, and his young star appeared at a Q&A session following the screening. Pinkaew is no stranger to action film, having helmed two of his country’s biggest box-office hits, Ong-Bak: The Thai Warrior and Tom-Yum-Goong.

He first told the audience a little bit more about the Gasu, another name for the Krasue. “Gasu is a type of demon that also exists in Malaysia and Cambodia, as well as Thailand,” he explained. “We’re not sure about the origin. At night, the head emerges from the body, lights up and flies around. We believe that the females eat placenta, so the demon will come after pregnant women. Thus people put thorny bushes in front of their houses to stop them. The Gasu also like to eat things vomited by humans, as well as frogs. Even in Bangkok, you can see thorny bushes around homes. So Thai are afraid of these demons even today.”

Rojanakatanyoo, who plays Veena, was asked what it was like on set. “During filming, it wasn’t really scary at all,” she said. “But we shot a lot at night, going until early morning. And the location was quite scary because we worked in a lot of abandoned buildings.” But she quickly added, “The director isn’t scary at all, he’s very quiet and it was wonderful to work with him.”

Pinkaew was asked whether he planned to turn the film into a franchise, and whether he could include some of Japan’s famed demons in the sequels. He looked pleased, while Rojanakatanyoo clapped in agreement. “In this film, we focused on the drama,” he responded, “so we didn’t really play up Veena as a demon hunter. I wanted to focus on the difficulties that she had, so I wasn’t really thinking in terms of turning it into a series. Maybe she can make it her mission in the future, going after demons and getting more powerful.”

As the applause died down, he mentioned, “In Thai horror movies, it’s not typical for demon hunters to use weapons [like Veena does], they usually use magic and spells. But the way they look, the Gasu are like aliens who come from another planet. So I thought of it more as a sci-fi film. If we were to do a Pt. 2 or Pt. 3, I would probably add more fantasy elements.”

After announcing that there is an upcoming Japanese theatrical release, Pinkaew told the crowd, “I think the Japanese audience will like this film, and if it does well here, that would give me the energy to do another film like this.”

Said Rojanakatanyoo, “Yes, I hope so! And maybe I’ll have a role in the sequel.”