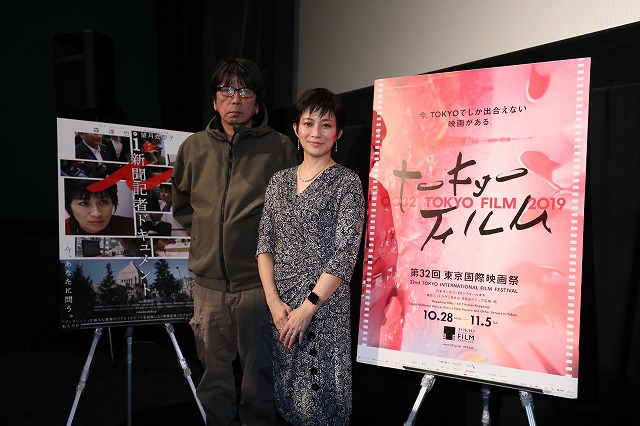 A Westerner watching Tatsuya Mori’s i: Documentary of the Journalist might not understand the degree to which its subject is singular; but it is clear, at least, that female reporter Isoko Mochizuki is ruffling a lot of feathers in her ongoing quest for the truth. Following a screening on November 4 at the 32nd TIFF, where it had world premiered on November 1, the director and his star appeared for a rousing Q&A session.

“As a director, I’ve rarely had my films shown in a cinema complex,” admitted Mori, known for such indie documentaries as A and A2, about the Aum Shinrikyo cult, and Fake. “Usually they’re in minor theaters. So it’s really a dream that I’m here. I feel a bit uncomfortable, but I’m also very happy to have people see it here. I’m impressed that TIFF actually screened this movie. When we first started talking about it, I didn’t think it would really happen.”

Mochizuki, referencing the recent controversies over the cancelation of a comfort woman exhibit at the Aichi Triennale, as well as the cancelation in Kawasaki of a screening of Shusenjo: The Main Battleground of the Comfort Women Issue, and the withdrawal of government funding from a film shown in TIFF’s Japan Now section, Miyamoto, due to the drug use of one of its actors, also expressed her pleasure at having the opportunity to premiere the film at TIFF.

In her patented rapid-fire style of speaking, she said, “[This film] is not just about me being a crazy, strange person, it’s about how this society has to change. I hope everyone who sees it will question their position and become a trigger for that change.

“I’m sure that you have your own thoughts and impressions about the film, and you’re wondering why they decided to make this film about [me]. I was blown away when the director asked me to do this. I know that reporters overseas are used to these kinds of films, depicting the stagnation of Japanese society, but this is a chance for us to say that to audiences in Japan.”

Although the film doesn’t mention Japan’s ranking 2019 World Press Freedom Index (it’s a very low 67; the US is at 48), its traditional media have earned criticism for their herd mentality, and for obediently following the dictates of their kisha clubs, which it’s considered a privilege to be a member of, and which allow them to cover specific government offices.

That makes Mochizuki, a reporter for Tokyo’s largest regional paper, The Tokyo Shimbun, a notable exception. She has defied the dominant media culture and become a press freedom folk hero for her prickly interactions with government officials, particularly at the Cabinet Office briefings that have helped make her (in)famous.

Mochizuki was publicly censured by the Cabinet Office recently, and to the government’s surprise, hundreds of supporters turned up at the prime minister’s office, rallying on her behalf and pressing for greater transparency at the highest levels. Earlier this year, a political thriller loosely based on a 2017 book written by Mochizuki, with a fictionalized protagonist who is clearly inspired by her, became a surprise hit.

i: Documentary of the Journalist thrusts the viewer into Mochizuki’s daily life as she travels around Japan chasing some of the biggest stories of the last year — from the ongoing disputes over US base re-siting in Henoko, Okinawa, to the initial dismissal of reporter Shiori Ito’s charge that she’d been sexually assaulted by a colleague with close ties to the Abe Cabinet, to the Moritomo Gakuen scandal implicating the prime minister and his wife — and relentlessly peppering officials with questions in her quest to get behind their smokescreens.

Mori was praised for his approach to telling multidimensional stories with voices that otherwise might be unheard or silenced. At TIFF, he turned each question back to the questioner before addressing it. “What do you think?” he would say. Or, “That’s your opinion.” 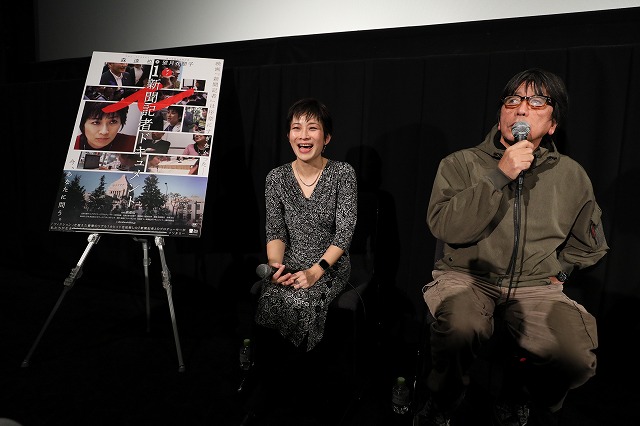 “When we showed this film a few nights ago,” he told the audience, “a reporter for Chinese media mentioned that there isn’t any free speech in China because the Communist party is such an all-pervasive force. But everyone in China knows this. In Japan, it’s the same — there’s this force hovering over and controlling free speech, but they don’t recognize they’re being controlled.”

When a viewer said she wanted to do something to effect change and asked for advice, Mochizuki admitted that “I get a lot of support via faxes and emails sent to my company. About 10% of the messages complain about me, but the others all say that they feel I’m representing their voice at these press conferences. I’m sure my paper has received a lot of complaints about me and there’s a danger that we’ll be removed from the kisha club. But my company has my back.

She continued, “I feel the same way sometimes, ‘I’m just one person, what can I do?’ All those words of encouragement from people is so uplifting, and if more people wrote in, maybe other media companies would support reporters asking questions. I think you should tell these media companies how you feel, so we’re not the only ones telling them. When we band together, we can be a force to be reckoned with. Even the prime minister’s office isn’t invincible.”

Mori agreed. “Getting your feedback is also very important to me,” he said. “My films have no intertitles, no music, no narration. American documentaries tend to be a lot more entertaining, and with this film, I wanted to make it a bit more entertaining by testing out a couple of different things, like the [animated sequences].”

Mochizuki laughed: “He was trying to get me to flare up in a lot of scenes, but I figured out his MO and didn’t let him get a rise out of me.”

Mori confessed, “I was trying to make her cry, but she never did. I even gave her eyedrops, but it didn’t work at all because she was looking at me like ‘Why are you doing this?’ and I couldn’t use that take.”

He said, “This is the first film I’ve made about a woman, and I’m really honored that it could be about Ms. Mochizuki.”