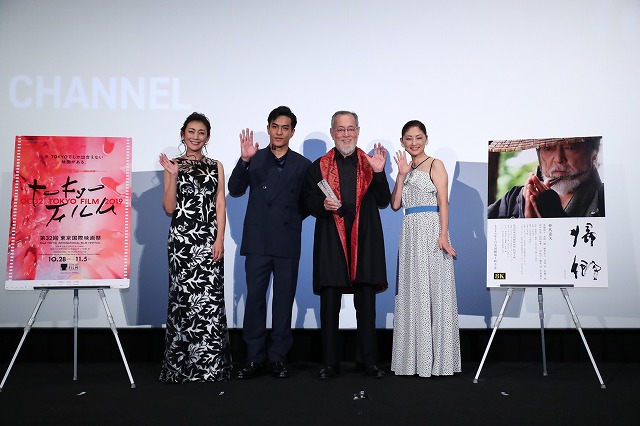 Noting that in 1985, the TIFF Opening Film was Akira Kurosawa’s Ran, also starring Nakadai, the emcee invited him to say a few words. The acting legend, holding his crystal award aloft so that everyone could see it, said “Thank you so much for this great honor. I’m so delighted to see so many people here today, and I’m so happy to have spent nearly 70 years as an actor.”

He received a huge bouquet from Takako Tokiwa, who played his daughter in the film, and spoke about experiencing the premiere among them.

“I’ve been acting for a very long time,” he said. “To see The Return with an audience, was a truly moving experience. Although I’ve appeared in so many jidaigeki period films, I felt somehow more moved at this one than I have before. It shows the twilight of a yakuza character, and now that I’m in the twilight of my career, I could really identify with the character. It brought me to tears.”

The Return deploys the latest 8K technology to bring Shuhei Fujisawa’s novel to colorful life. It was helmed by Shigemichi Sugita, the man behind popular Japanese TV series “From the Northern Country.” Set in a mountainous village in Kiso Fukushima, in Japan’s Shinshu region, the film is set against the backdrop of a spectacular, untouched landscape, into which Nakadai’s character, Unokichi, makes his unannounced return home after 30 years on the road.

At first keeping his identity a secret, saying only that he is an old gangster who doesn’t want any trouble, Unokichi soon finds something unexpected waiting for him, and makes a dramatic decision that will allow him to come to terms with his past, as well as to find redemption for his many misdeeds.

Nakadai’s costars had nothing but good things to say about the experience of working with him: “I think Mr. Nakadai was an overwhelming presence for all the cast and crew,” said Tokiwa. “But he was so kind and treated us so warmly that although I was scared to death at first, he allowed me to do my best.”

She added that she’d been struck by how popular he is with overseas audiences. “This film had its world premiere at Mipcom last month, and so many people came up to us and told us how moving it had been for them.”

Kazuki Kitamura told the audience, “About 7 years ago, I played opposite Mr. Nakadai in a film, as father and son. This time, I’m playing the younger version of his character. As an actor, I felt a lot of pressure. I watched a lot of Mr. Nakadai’s earlier works to see how he walks and speaks. But it was such an enjoyable set, and he put us all at ease.”

Said Misato Tanaka, “Mr. Sugita’s direction was wonderful, he paid attention to all the details and made it all feel very authentic. I went onto set as an open page, and we created this character together. I thought she was a more delicate character, but the director encouraged me to embrace her madness. That’s how I discovered that there were reasons that she would stay in Unokichi’s life for so long.” 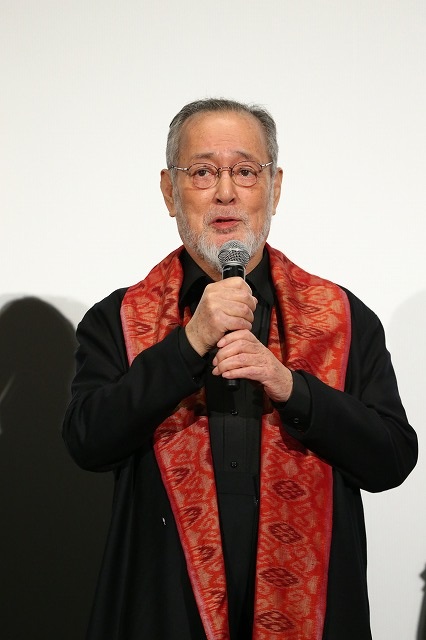 Asked how it was to work with the director, Nakadai said, “I’m soon to turn 87 and I should be thinking about retirement. But after Mr. Sugita said ‘Cut!’ he would then ask me to do another take with a different style, and we would go again. So I want to thank him for making me feel like such a newcomer.”

Tokiwa recalled: “We were all feeling really sorry for Mr. Nakadai. There was a scene where it’s raining and he falls into the mud, and he had to do it again and again.”

Tanaka noted, “The director always wore a big smile, no matter what he asked us to do, so that made us keep wanting to do our best.”

After apologizing to his cast for being so demanding, Sugita spoke about the film’s pioneering use of 8K cameras, by the Samurai Drama Channel (Japan is expected to begin full-fledged 8K broadcasting in the next few years). “I’ve done many period pieces before and always wanted to use a candle as a source of light, but I couldn’t do it until now. The actresses were worried that it would be unflattering, but I think we’ve made them look beautiful.”

The Return will be opening at an art house theater in Ginza soon, and Nakadai was asked for final remarks. “In my first meeting with the director,” he recalled, “we were talking about how the film is about redemption. As the old yakuza goes back to his homeland, in my mind, that homeland was death itself. I think it’s a really philosophical film and I hope it will give you much to think about.”