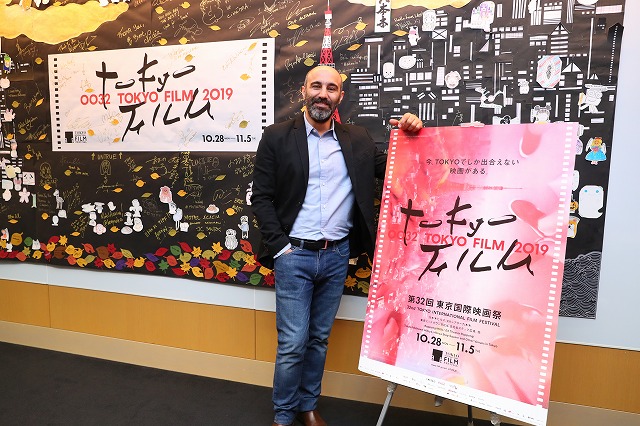 Writer-director Mohsen Tanabandeh was on hand to answer questions on November 4 following the international premiere of his thrilling road movie, The Oath, playing in the Asian Future section of the 32nd TIFF.

In the film, Razieh (played by veteran Mahnaz Afshar) believes her sister was killed by her husband, Bahman, in a drunken rage. She has been fighting for her brother-in-law’s conviction for the past 5 years, but it appears he will be released due to a lack of evidence unless she can make it to court in Mashad to testify to his guilt.

In the Iranian judicial system, the sworn oaths of 50 men and women can put enough pressure on a judge to convict. Razieh – determined to avenge her sister’s murder – rounds up a busload of several dozen relatives to head to court and declare Bahman as the murderer. The road there is anything but a smooth one, as the claustrophobic conditions bring out simmering family feuds and resentments.

Most of The Oath takes place within the tight confines of the bus, a challenge the director said he worked through with his cinematographer. The filmmakers actually used two buses, one moving to capture shots of the bus driver, and one on a trailer with its tires removed to capture the passengers. Cameras were placed on rails on the aisle and ceiling for tracking shots, while other cameras were hung outside in baskets for exterior shots of the bus while it was moving. “The story we wanted to tell could only be told in this way,” Tanabandeh told the audience.

The attention to camera angles gives The Oath a dynamic framing in spite of the stifling interiors, but the exteriors are also ravishing, with frequent shots of the bus traveling through a picturesque Iranian desert landscape. Tanabandeh said the bus itself even went through a sort of casting system: “We had to think of not just the bus model, but the route as well. It was important to think about the color of both the bus and the background.”

The Oath’s plot is delivered via rapid-fire dialogue by seemingly every passenger on the bus. But while Razieh, her husband, and the bus driver are played by seasoned film actors, the rest of the passengers were local stage actors and amateurs chosen through auditions who had never acted for the screen before. Most of the actors had fixed seating positions and lines, and Razieh moved up and down the bus throughout the film, cueing their dialogue.

Explaining his decision to cast so many unknowns, Tanabandeh said, “I didn’t use film actors because I wanted their acting to look as natural as possible based on reality.” This also created some tonal difficulties. “I had to ask the three veterans to control their acting to achieve a balance with the rest of the cast,” he said.

The sworn oath (ghasam) is very serious in Islam and should not be said casually, but the bus passengers seem to take oaths quite lightly, as in one comical situation regarding the mysterious death of a family member’s dog. “To make an oath regarding somebody’s life without being responsible for your words troubled me,” said Tanabandeh.

This cavalier attitude can also have a dark side, leading to cases in Iran where innocents have been jailed or executed for personal vendettas. “If the family members of the victim buy enough people, they can put an innocent person to death,” explained Tanabandeh. “Those people who make false statements can also be punished by the law if they are caught.”

Tanabandeh is a well-known actor in his native Iran and, like Japan’s “Beat” Takeshi Kitano, might be more well-known by the Iranian public for his TV appearances than the films he has helmed. When asked why he chose to stand behind rather than in front of the camera for The Oath, Tanabandeh responded, “I want to keep acting, but when I come across a story that I feel I can tell better than others, I can’t help but direct it.”