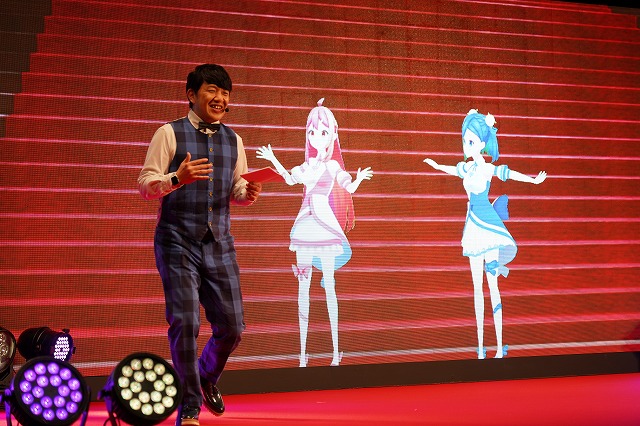 A packed crowd gathered at the Roppongi Hills Arena on November 2 for a collaborative open-air event hosted by the Tokyo International Film Festival and NTT Docomo. The event featured a mix of virtual idols, live performers and audience participants to promote the potential of 5G-enabled telecommunications technology.

The show – part of the Japan Content Localization and Distribution (J-LOD) Subsidy Project supported by the Ministry of Economy, Trade, and Industry and designed to produce globally distributed digital content – opened with Kilin and Xi arriving via limousine on the large LED widescreen. The two VR idols are stars of the virtual idol project Live Animation Heart + Algorhythm, co-produced by Japan’s NTT Docomo and China Mobile’s Migu.

Kilin and Xi engaged in playful banter in Japanese and Chinese, while emcee Yoshiyuki Hirai, of the comedy duo America Zarigani, provided balance to the digital proceedings as a jovial flesh-and-blood presence.

To demonstrate the “liveness” of the event, Kilin and Xi played shiritori – a Japanese word game where players must say a word that begins with the final letter/sound of the previous word – with eager audience members. Kilin nearly stumped the crowd with le, a sound that is not often used to start words, before one audience member jumped in with a rowdy, “Let’s go!”

Special guest comedian PIKOTARO came on stage to joke around with the idols, declaring at first glance, “My, aren’t your eyes big!”

The highlight of the event was when PIKOTARO briefly left the stage to reappear on screen as a digitized version of himself. This was made possible by 1-10 Inc.’s high-speed 3D scanning system ANATOMe™, which scanned the comedian’s body before the show and rendered him as a 3D avatar to perform his famous “PPAP” (Pen Pineapple Apple Pen) song routine with Kilin and Xi.

ANATOMe™ also scanned several audience members before the show, who appeared on screen as backup dancers for Kilin and Xi’s more elaborate music videos. The audience members’ faces and bodies were mapped onto motion-captured 3D dancing avatars. The avatars, like PIKOTARO, performed synchronized sequences for a laughing crowd, albeit to the catchy pop tunes of Kilin and Xi, like their hit song “520.”

This second performance led by Kilin and Xi was more elaborate than the initial demonstration, taking viewers into several pop-colored lands – a green meadow, outer space, sitting on a moon – to the tune of remixed versions of popular English-language tunes such as “Over the Rainbow,” “Danger Zone” and “Moon River.” There were even genre detours into zombie films and kaiju eiga, showing the potential for spectators to immerse themselves in thrilling environments.

The final song brought out a dozen live performers to dance alongside Kilin, Xi and the digital audience avatars, twirling batons that flashed out the words “Tokyo International Film Festival” when spun. The combination of live and digital performance fused the virtual and real on stage in brief but kinetic style.

Those who couldn’t participate in the festivities should fear not. From November 1, Live Animation Heart + Algorhythm has released 34 songs online for viewers to watch and, in the very near future, hopefully dance to alongside their favorite virtual idols.