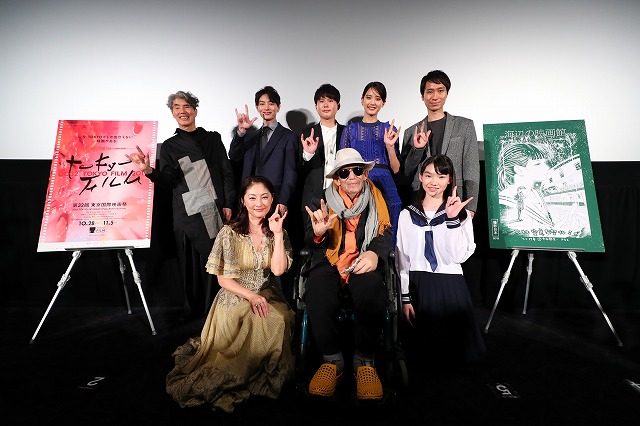 On November 1, a theater full of lucky filmgoers had the opportunity to experience the world premiere of Labyrinth of Cinema, the latest tour de force from legendary director Nobuhiko Obayashi.

Not only was the director debuting his latest epic in the 32nd TIFF’s Japan Now section, he was also the focus of a five-film retrospective in that section, tracing the long career that has seen him dubbed a “Wizard of Cinema.”

Labyrinth of Cinema, the latest in the director’s list of starkly anti-war films, is set in Onomichi, Hiroshima, his hometown and the setting of many of his works. The film centers around the final day at a classic seaside movie theater, where a cast of characters assemble to watch an all-night screening of classic Japanese war movies.

Before long, a few members of the assembled crowd, too young to have experienced war themselves, are sucked into the films, and find themselves replaying some of Japan’s most devastating conflicts and learning about the true costs of war.

But a mere plot summary does little justice to Labyrinth of Cinema, which is packed with Obayashi’s signature off-the-wall visuals, genre-defying leaps, sly sense of humor and, above all, a sincere desire for a world without war.

As the credits rolled on the 179-minute epic, a roar of applause erupted both for the film and for the entrance of the ailing director himself, arriving by wheelchair. He thanked the audience and told them “I’m very moved to see so many of you here.”

Before the official Q&A session came the presentation of TIFF’s Lifetime Achievement Award, given to Obayashi by Festival Chairman Hiroyasu Ando.

“Thank you for creating your many wonderful, touching films over the years,” said Ando. “You recently said you’d keep making films for another 30 years, then you corrected it to 35. I hope today you’ll extend it to 40!” 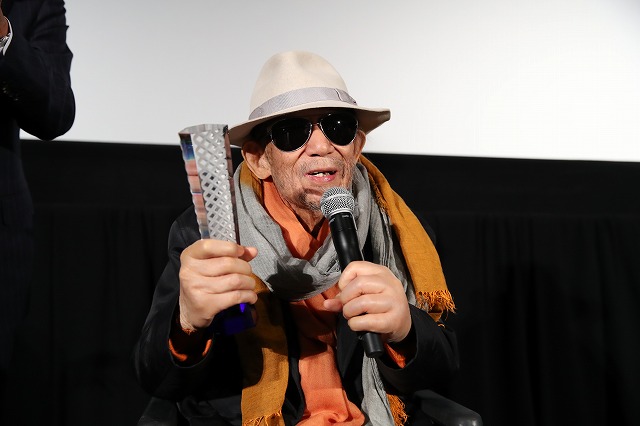 Obayashi, who also received a bouquet from Labyrinth of Cinema actress Takako Tokiwa, replied to a wave of applause, “In that case, I’m going to make films for another 1,000 or 2,000 years!”

The director was then joined on stage by the main cast of Labyrinth of Cinema: Takako Tokiwa, Takuro Atsuki, Takahito Hosoyamada, Yoshihiko Hosoda, Rei Yoshida and Hirona Yamazaki.

Atsuki, who plays young cinephile Mario Baba, commented that he was actually reprising a role, after a fashion: he had played the young Mario in an Obayashi-penned, Onomichi-set film back in 1998.

“For me, it was like continuing the role 20 years later,” said Atsuki. “A very rare event indeed. Because this is such a unique film, I’m sure each and every one of you in the audience had your own impression of it.”
Hosoyamada, who plays another young man sucked into the world of film, stated, “Obayashi really put his soul into this film, and it made me think about what we can do to make the future better.”

Hosoda, who plays a wannabe yakuza, said that working with the auteur for the first time really helped him grow as an actor.

“Films are like school,” responded Obayashi, taking up a theme that runs through the film itself. “You did grow a lot over the course of the film. It’s because there are actors like you, who put their heart and soul into the production, that films are possible.”

Yamazaki, who has appeared in several Obayashi films, revealed that she has always wanted to be in a musical, an action film and a film in which she gets to speak in dialect.

“And in this one movie, the director made all those dreams come true,” she said.

Finally, the spotlight turned to Rei Yoshida, the young actress who played the film’s main role, a young woman whose destiny seems to be intertwined with the history of war in Japan.

“This was my first time to be in a real film, and there was dialect, action, tap dance… I was really nervous, and still am now! I learned many things making this movie that I didn’t learn in school. It’s better than a textbook, so I hope many people see it.”

Obayashi responded, saying, “We need to make films to educate the youth about war. But the audience has to work hard, too. Unless you take action, the world isn’t going to become a better place. It’s hard to protect freedom, but we have to do it.”