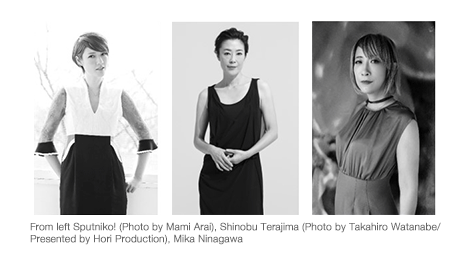 Women in Motion, an official program of the Cannes Film Festival that was launched in 2015 to spotlight the challenges and contributions of women in the film industry and the arts, marked its first event in Japan on the evening of October 31, as the 32nd Tokyo International Film Festival and global fashion conglomerate Kering cohosted three of the country’s leading creators: actress Shinobu Terajima, photographer/film director Mika Ninagawa and artist Sputniko!

Film journalist Atsuko Tatsuta kept the conversation focused on gender inequality and the representation of women as she moderated the event, asking the panelists about their own experiences and insights into how the industry could and should change.

Ninagawa, winner of the prestigious Kimura Ihei Photography Award and acclaimed film director (Sakuran, Helter Skelter, Diner, No Longer Human), recalled what it was like when she first started her career: “Back then, the fact I was a woman was always highlighted. But this year, no one’s mentioned my gender. People continue to talk about me being the daughter of (famed stage director) Yukio Ninagawa, though. On my films, I’ve employed a lot of female staff, maybe over 50% of the total crew.”

Terajima (Vibrator, Akame 48 Waterfalls), who made history in 2010 as the first Japanese actress in 35 years to win the Silver Bear at the Berlin Film Festival, for Koji Wakamatu’s Caterpillar, spoke about her position as a woman in the acting community: “I think it’s still very difficult for women to find lead roles. In Japan, there’s this kawaii culture celebrating women in their 20s, so it’s difficult to get cast as the lead. I wind up playing the mother. I spoke with Cate Blanchett about this, and she said she also thought it was rare for older females to get leading roles.”

“Unlike Mika, I like having men surrounding me,” contined Terajima, “maybe because I was raised in an environment (the kabuki world, her family tradition) with that. On set, there are a lot of men in technical roles. So I feel like it’s a little unnatural to have lots of women around.”

Sputniko!, a British-Japanese film and multi-media artist who also teaches at the university level, noted, “There’s a history of women experiencing violence and abuse, but before, they couldn’t express this in the mainstream press. So it’s an important trend that they’re now able to talk about it. In the film industry, there a lot more male directors and writers, and I think they haven’t created the proper storylines about women, who make us 50% of the population.”

“I always try to reflect the female perspective in my work,” said Ninagawa. “Actresses often have to act roles that they can’t relate to.”

Recalled Sputniko!, “When I was starting out, I got some advice from a male artist who told me, ‘You’re talented, but if you want to get famous, you can’t just focus on female stories.’ The male perspective is different. If we had more females writing and directing, we would get different perspectives.”

The moderator pointed out that only 7% of films in Japan have been helmed by women, and told Ninagawa that she must be awfully tough to account for two of them this year. “Well, it was tough to make the films, but not because I’m female,” said Ninagawa.

Both Ninagawa and Terajima spoke about their other pressing roles: As a mother, said Terajima, “You have to compromise over and over, and you have to handle things in front of you as they come. You’re always pressed for time. It’s hard to be creative when your kids are interrupting you.”

Ninagawa nodded vigorously. “You have to give a lot of time to [the children], and it doesn’t leave you a lot of time to think about new projects, to be creative. I was shooting until three days before I gave birth.”

Sputniko! told her fellow panelists that they were great role models for working mothers. “I’m turning 34 this year and I love my work and the act of creation, but I also want to have a family,” she said. But I’m a bit too scared to make that commitment. If you’re a woman, you have to find someone else to take care of your kids. The support that working women need is something society isn’t ready or willing to give them. I froze 26 eggs when I was 26, and I’m really promoting that idea to all women who still want to work in their 30s.”

Noting that socialization is key to the roles played by men and women, the moderator asked specifically about whether any wage disparity existed between the women’s own parents. Terajima, whose mother is just as famous an actress as is her father, said that although they essentially earned the same, there was gender inequality in her family because her younger brother was the focus of all the attention when they were children.

Ninagawa recalled that her father had always told her she needed to make her own way and her own living, which had increased her surprise when she first started making a name for herself and everyone focused on the fact she was a woman.

“We need to take the initiative to become truly independent,” said Suptniko!

All three panelists agreed that it was crucial for women in Japan to have role models, and to be empowered by an education incorporating the nongendered possibilities available to them.

“When people have the power to take the initiative,” said Terajima, “maybe the issues that we’re facing will go away.”