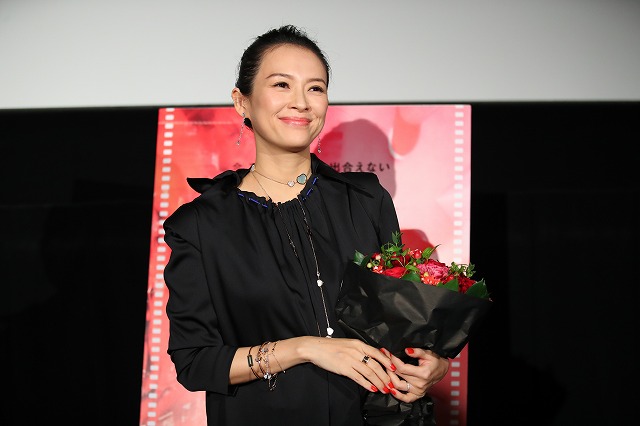 It was 20 years ago that The Road Home paired master Chinese director Zhang Yimou with soon-to-be megastar Zhang Ziyi in her feature film debut.

With Zhang Ziyi in Tokyo for the 32nd TIFF as president of its International Competition jury, it was nigh-impossible for the festival not to screen the film, the 20th anniversary of which also marks 20 years of Zhang Ziyi’s career in film.

Zhang took a break from her jury duties to join a Q&A session following the film, which was screened to a theater packed with both those who fell in love with it 20 years ago and those experiencing it for the first time.

“It’s really such an honor for me to have this screening,” Zhang told the crowd. “This film is so meaningful to me, especially in Japan. I remember when Zhang Yimou and I first brought it to Japan 20 years ago, and I’m so happy to be here with it again tonight.”

The film, set in a rural Chinese village, begins in the present day (1999, that is) lensed in stark black and white. Hearing of his father’s death, a young man returns to the village, his hometown, to find his widowed mother in despair — after all, her marriage was one based on love, the first non-arranged marriage to ever take place in the village.

We then jump back 40 years to a simpler time, shot in beautiful color, and trace the heartwarming courtship of the mother and father, played by Zhang Ziyi and Zheng Hao. The story is a simple one — after all, we know from the outset the two will ultimately end up together — but the real charm of the film comes from the earnest, unaffected performance by then-newcomer Zhang. That naturalness was thanks in large part to Zhang’s inexperience, she told the crowd. 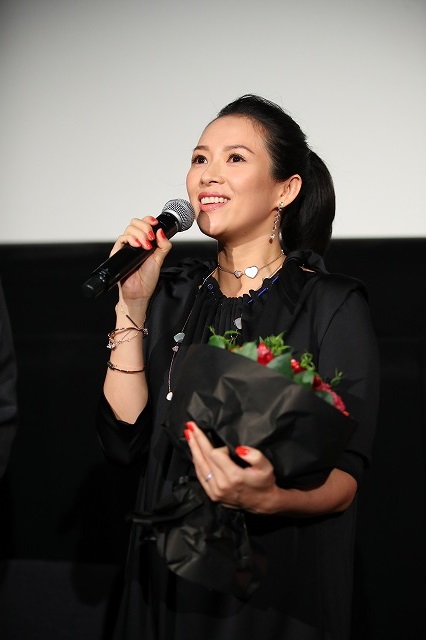 “So for me, this film is very precious,” she continued. “It really recorded who I was as a person. When the character in the film cries, or is happy, or embarrassed, that’s me — my true young self. Now, at my age, I don’t think I could create a performance like this.”

On the other hand, Zhang mused, “Thanks to this film, I learned that no matter how old you get and how much experience you have, you should be willing to throw away the ‘craft’ and just show your natural self.”

The Q&A session brought a few surprises for Zhang: one, a bouquet of flowers from Festival Director Takeo Hisamatsu to celebrate her 20 years in film. As Hisamatsu handed Zhang the flowers, he admitted that seeing the film for the first time in years “made me cry all over again.”

Zhang was also treated to a video message from the film’s director, Zhang Yimou, who congratulated her on two-decade career and said, “You’ve worked tirelessly with great diligence and shown the world you’re a fine actor. You’ve touched audiences everywhere and live in their memories. I’m sure every director you’ve worked with would say the same.”

In response, Zhang Ziyi thanked the director, as well as other world-famous filmmakers she’s worked with, like Wong Kar-wai and Ang Lee, for helping her grow.

Perhaps the most memorable question of the evening came from a Japanese filmgoer who confessed he had fallen for Zhang when he saw The Road Home on its first release, and had always wanted to meet her.

“Today, my dream has come true,” he said to cheers. He then asked which of her roles Zhang had found most memorable.

“I like playing women with strong personalities,” she responded. “I’ve played many women experiencing sorrow, and I like that kind of role, too. I’ve shed so many tears in my roles, I can’t count how many.”

But, she noted, many of those tears were ones of joy.