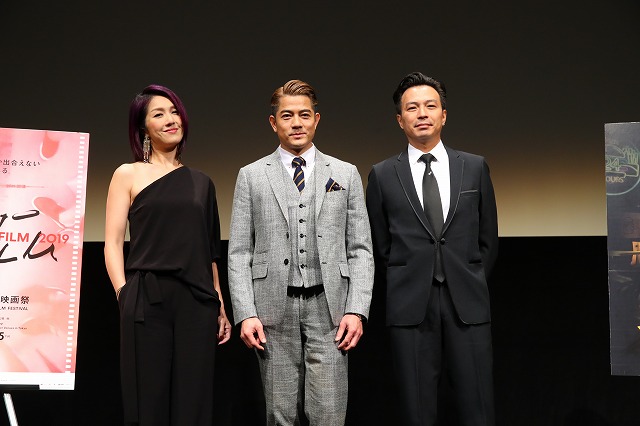 A packed audience awaited the appearance of director Wong Hing Fan and superstars Aaron Kwok and Miriam Yeung following the October 29 screening of their new film i’m livin’ it, making its world premiere in the Asian Future section of TIFF 32. It was the first time all three had been together onstage.

Wong, making his directorial debut after serving on 30 films as an assistant director, told the audience that he’d been wanting to make the film for a long time.

Recalling that he’d first heard about the project 2 years ago at the Cannes Film Festival, Kwok said, “I saw the script at that time, and I told them that I wanted to act in the film no matter what the conditions were. I want to support filmmaking in Hong Kong, and I hope everyone who sees the film will feel the same way.”

Yeung commented, “I’m very honored to have taken part in the film with this wonderful, meaningful script. The last scene is rather heavy, but the film isn’t just about entertaining audiences, it’s about the connections between people.” 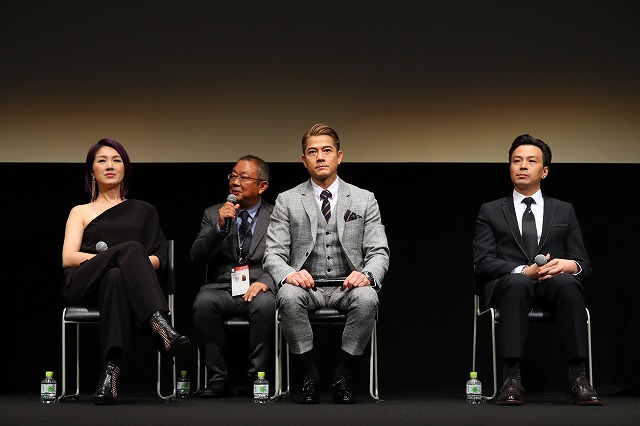 The film takes its name from the 24-hour fast food joint where much of its action occurs, a McDonald’s-style spot (recall the company’s catchphrase, I’m lovin’ it) somewhere in Hong Kong. Highlighting the tragic reality of homelessness and income disparities, i’m livin’ it tells the story of a group of impoverished people who shelter together each night, buying a cup of coffee or, if their menial jobs have allowed it, a burger in exchange for a hard chair to sleep.

Once a star in his investment brokerage, Bowen (Hong Kong superstar Aaron Kwok, Project Gutenberg, Port of Call) now spends his nights there as well, and has assumed the position of godfather, helping his “roommates” solve problems and find part-time jobs. The other denizens include a young mother (Cya Liu) who is trying to pay back a loan shark who keeps lending money to her gambling-addicted mother-in-law; an old man (Alex Man) hoping his wife will see him in the window and come home; and a young runaway (Zeno Koo) whom Bowen takes under his wing and teaches the ropes of survival. “Why don’t you just beg? asks the young man, at first averse to the hard work involved. “Beggars can beg all they want,” Bowen responds. “We scour, renew and promote.”

Nightclub singer Jane (Yeung, Love Off the Cuff) lives in a temporary shelter, but when it becomes clear that Bowen has neglected his own health while making strenuous efforts to help the others, she decides to “invest in Bowen” by helping him help himself. “Among all investments,” he tells her, “emotional investments cost the least and pay the highest rate of returns.” This, put elegantly, is the theme of the film, and Bowen is amply repaid for the many kindnesses he has wrought. 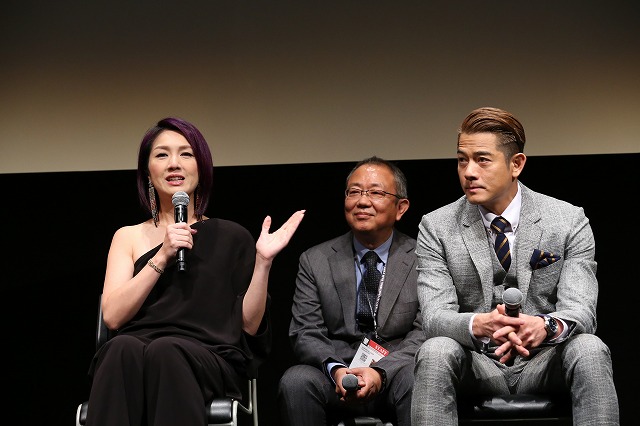 Commenting on his costar, with whom he is surprisingly appearing for the first time in their long careers, Kwok said of Yeung, “I think she’s brilliant, very smart. When we were filming, she was also doing a TV drama in which she was playing a completely different type of role. But everything was possible because we had great teamwork. Although the director’s very young, he’s really accomplished and very smart, so he was able to get what he needed for each scene.”

Said Yeung, “I’m really grateful to Aaron and the director for trusting me to do this job, especially because the role on the TV show Aaron mentioned was so different from my sad, lonely role in the film. I think what I learned is that it’s really important for all of us to be able to find happiness, no matter what our challenges.”

Kwok said he had researched the type of burger joints depicted on screen, and had discovered there are many homeless people in Japan, too, although they are living in internet cafes. “But that’s just the location,” he said. “What we wanted to convey was the love between the people living in such a location.”

Added Yeung, “For me, fast food franchises were warm memories for me because my parents used to take me there to have French fries. But in the film, these people in the burger shop are refugees. They’ve been through so many hardships, but worst of all, they don’t have families to share them with. But [in the shop] they form a family, and the love of family is really the most important thing we can have.”

Following its TIFF world premiere, i’m livin’ it is set to be the closing night presentation of the London East Asia Film Festival, on November 3.