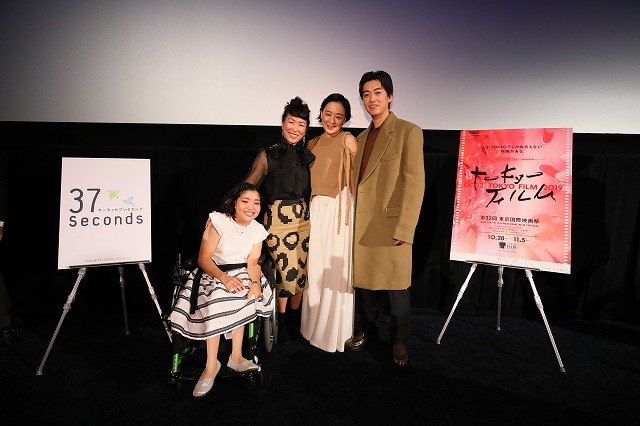 Before its domestic release, the film was screened on October 29 at the 32nd Tokyo International Film Festival (TIFF) in the Japan Now section. The enthusiastic audience was lucky enough to welcome the director and three actors: Mei Kayama, Misuzu Kanno, and Shunsuke Daito, for the post-screening Q&A. In her first remarks, Kayama nervously said, “Thank you for coming, watching and being here. I have no idea what to say on this occasion,” which led to instant laughter.

Hikari, who told the audience that she’s fluent in English and “Osaka-nized” Japanese, explained that the project started around “4 or 5 years ago.” Having met people who informed her of the issues surrounding disabilities and sexuality, the director became “interested in female sexuality and started interviewing people,” eventually deciding she wanted “to make a film that can encourage women.”

To make a film about a disabled protagonist, it was significant for the director to have the role played by someone with disability. “For me,” she explained, “there is no meaning to make this film if an able actor is sitting in a wheelchair. The primary importance was working with those who are actually struggling with their bodies.” To find the perfect actress to play the protagonist, she promoted a call for public auditions to more than 1,000 organizations. Luckily enough, Kayama was one of those who were interested and came for an audition. Kayama, who suffers from cerebral palsy herself, revealed why she decided to go to the audition: “It’s a bit difficult to say, but I thought I could see something different.” 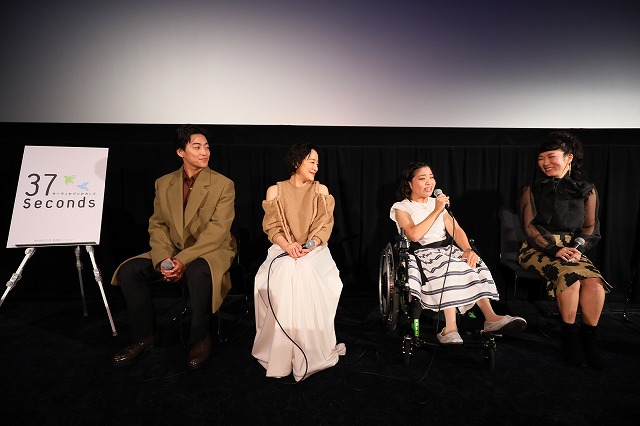 Kohei Ando, programming adviser of TIFF’s Japan Now section, mentioned the relationship between the disabled daughter and the over-protective mother, which he felt looked almost as if it were a documentary. According to Kanno, who played Kayama’s mother, she was specially allowed to actually live with Kayama before shooting. “She [Kayama] is such a smart, funny, charming woman,” said Kanno. “We often had intense discussions until midnight, or contemplated the concept of being an actress.”

What makes 37 Seconds so fascinating is its attitude. Hikari depicts the underground world of Tokyo in an alluring way, showing that it can actually function as home for homeless and marginalized people. Rather than being a critical voice, 37 Seconds celebrates characters with a strong will to live a life that they want to live, despite evident disapproval from society.

Ando pointed out that, although the majority of people pretend they are not disabled, no one is completely abled. Hikari responded, “I wrote a story of woman’s independence, and it doesn’t matter too much to the narrative if the protagonist is in a wheelchair or not.” The director’s aim was to make the audience forget the protagonist’s disability and see her simply as a girl who dreams to become a mangaka (comic writer).

The biggest narrative turn in the film is a trip to Thailand. This decision was influenced by the director’s encounter with Kayama. Hikari revealed that her actress actually has a twin sister with an abled body, who works as a teacher in Thailand. “So, we were like, ‘Let’s go to Thailand!’” It seems like the shooting in Thailand was a lot of fun. Shunsuke Daito, who plays Kayama’s friend in the film, enthused, “We had parties, and obviously the director was having the most fun. I have many videos of her dancing so hard.”

37 Seconds is scheduled to be released in Japan in February 2020.