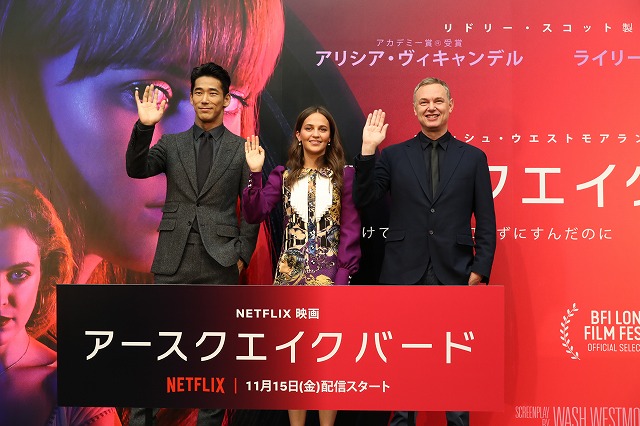 Appearing before an SRO crowd preceding the TIFF Special Screening of Earthquake Bird, a Netflix original film that will be available on the VOD platform in 190 nations worldwide, director Wash Westmoreland and Swedish star Alicia Vikander both stumbled a bit over their Japanese-language remarks. When the mic went to Japanese actor Naoki Kobayashi and he said cheerfully in English, “Hello, everybody,” the laughter was immediate. 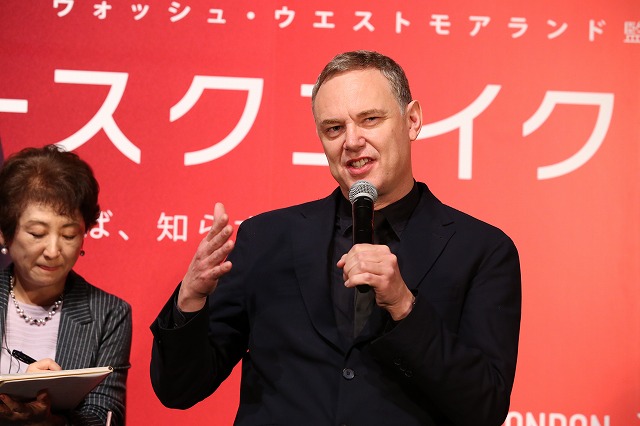 UK-born Westmoreland (Colette, Still Alice) had studied at Fukuoka University before moving to the US and eventually taking up residence in Los Angeles. He told the audience, “It was always a very special story to me, about a relationship between a Westerner and Japanese people. So when I saw it come together, I felt euphoric that the story captured for me the experience of being in Japan.

“When we were making it, I was very conscious of wanting to make it authentic to the Japanese experience, the Japanese way of live,” he explained. “I couldn’t do that alone; I had incredible collaborators, and we formed a creative team.”

Westmoreland adapted Earthquake Bird from the award-winning 2001 crime novel by Susanna Jones, who was living in Tokyo in the 1990s at a time when the headlines were seized by the news that British nightclub hostess Lucie Blackman had gone missing for months, before she was found brutally murdered.

The film is set in 1989, and for anyone who was here at the time, presents a time capsule of Japan atmospherics. It doesn’t hurt the film that the director chose to work with acclaimed production designer Yohei Tanada and cinematographer Chung Chung-hoon (Park-chan Wook’s regular collaborator). 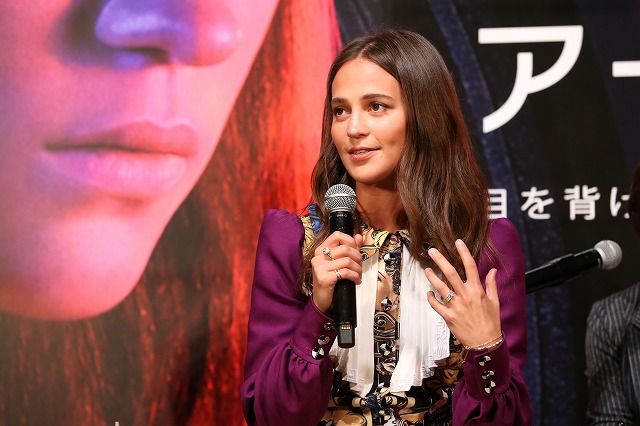 Vikander (The Danish Girl, Ex Machina), in her first lead role since Tomb Raider, plays Lucy Fly, a chilly Swedish translator who’s been living in Japan for five years and is desperate to fit into her adopted home. Because the film is told in reverse chronological order, we do not meet her ebullient American friend Lily Bridges (Riley Keough, Magic Mike, American Honey, Logan Lucky) until Lucy has been taken in for questioning by the police, implicated in Lily’s mysterious disappearance when they find body parts in Tokyo Bay.

As she answers their questions in fluent Japanese, flashbacks reveal more about Lucy’s life, including her initial meeting with Japanese photographer Teiji (Kobayashi, making his international film debut), who works as a soba chef part time while amassing an unusually large collection of photos that he doesn’t seem to share with anyone. Lucy soon becomes obsessed with her enigmatic lover, so when Lily begins to flirt with him, the intensity of her reaction surprises her as much as it does Lily.

Westmoreland noted that he sees the film “as a very unconventional thriller; more like a psychological drama. Because the real mystery is in Lucy’s past, that’s what the film really explores. It’s more similar to certain Western thrillers of the 90s, or to Kiyoshi Kurosawa’s Cure, or Ishii’s Angel Dust, where it’s all about the psychology, the complexity, the power between the characters, rather than the actual setpiece thriller pieces.”

Vikander recalled that the director had shared several different cuts of the film with her during the long editing process. “Wash knows that I always try to learn as much as I can, so when I saw the finished film, I got on the phone to tell him he’s made something so unique. I don’t think there’s any film in the west that looks and feels like this. I was so happy and honored to be shooting in Japan. Everyone who worked on the film was so kind and hard-working, and to come and do this film was a real privilege.”

She was asked about the monumental task of learning so many lines in Japanese, a language she doesn’t speak. “Yes, you saw me just now getting so nervous over just a few lines,” she responded with a laugh. “It was a much safer environment on set. I made a similar journey as Naoki, coming from Swedish films and then doing my first English-language films. I love how, over the past few years, the world has gotten smaller and so many different cultures have had a chance to work together. I think new kinds of art comes from that. To learn about Japanese culture by trying to learn as much language [as possible] was a great way in.”

She smiled broadly again. “I was very happy and lucky that I got to be here and immerse myself in the life here. I met a lot of people who I now consider my friends. I went and had soba the other night — it’s my new favorite dish, cold soba.” She turned to Kobayashi. “We had a lot of adventures over the months I was here.” 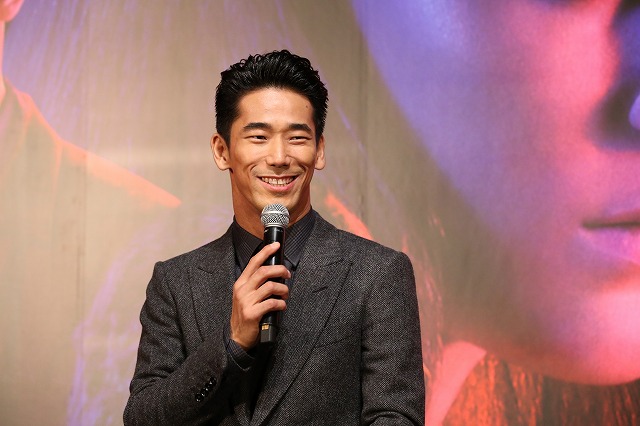 Kobayashi, star of Japan’s Exile theatrical troupe and leader of the Sandaime J Soul Brothers before making his film debut with Tatara Samurai in 2016, was asked how it felt to make his international debut with the film. “This is a great film about Japan, where I was born and raised,” he responded. “I’m so glad I could work with a director, cast and crew who respect this country. It was my first role where I speak mainly in English, and I hope it piques the interest of many Japanese as well as those who are interested in Japan.”

Westmoreland recalled that he had worked closely with his Japanese casting director, Yoko Narahashi, to find the right actor for Teiji, and that it had been an exhaustive process. “Then we saw Naoki’s audition and I was like, ‘He has it. He has it.’ He has the intensity, the darkness, the complexity. I told Yoko, ‘This guy has star power.’”

Admitted Kobayashi, “I spent a lot of time preparing, since the script was in English, not Japanese. I felt empathy with Teiji. I looked for something I could share with him, and find the hidden parts of the character. The director and I talked a lot about Japanese culture, values and ways of thinking to further develop Teiji’s character. And Alicia and I talked a lot during production.

“Wash, Alicia and other filmmakers helped me very much. I had the opportunity to meet Ridley Scott at the London Film Festival [premiere of the film] and he gave me a lot of encouragement. I’d like to continue playing roles using both Japanese and English.”

Asked about working with Vikander, Westmoreland said, “I consider myself really lucky to have worked with some of the world’s greatest actresses. When I wrote Earthquake Bird, I thought, ‘Who is the actress who’s going to commit to this role, to learn Japanese and really deliver the complexities of this character. I knew Alicia could completely ace the role. The daily revelations and depth that she brought to the set were a constant joy to me. I learned a lot from working with her.

Vikander mentioned that they had all hoped to be able to show the film on a big screen at TIFF during the production process, so “being here and getting to meet the audience and fans is extremely humbling. I think it’s a beautiful, poetic story mixed within the thriller that it is, and I think people will enjoy the story of these characters, and will also see a film that wonderfully, successfully merges these different cultures. I think people will [hope] that more films like this will come out in the future.”